In Between Men follows four friends in NYC who live "in between" a gay world, whose cliches they don't relate to, and a straight world they don't belong to. They are successful, professional men not defined by their sexuality. Through wild adventures, racy story lines, joys and pains, underscored by the pulse of New York City. From acting to story to presentation, this one is pretty bad. It is nothing but a guilty pleasure but at least it did make history by being the first gay web series. (2/10)

I absolutely loved this film. 15 year old blind teenager Leonardo is good friends with Giovana. She is his best friend and drops him home every evening from school. A new guy Gabriel joins the school and Leonardo's life changes. He starts accompanying them and Leonardo starts to have feelings for him. Giovana has o struggle with finding out about this new found feeling of his best friend and in his own sweet way Gabriel does reciprocate to Leo's feelings. Beautiful and very touching. Excellent acting by everyone. (8/10) 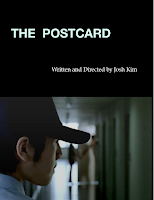 Another beautiful film. A post office clerk mistakenly thinks that a customer is trying to get her attention by writing open love letters on postcards he sends out. After fighting with her co-worker , she finally decides to go and meet him. Little does she know that his love letters were actually being written to himself to catch the attention of the postman who delivers his mail and on whom he is developing a crush. A very interesting short story of teenage crush and how hearts are broken. Very touching and nice beautiful film and very well directed. (8/10)

Kyle is a young farm boy who lives with his father. They have a cow Willis. Kyle is so lonely that the only pleasure he gets is being with Willis. One morning at breakfast the father announces that their meat supply has come to an end, and he will have to kill the cow. That night Kyle hears Willis' cowbell off in the distance but when he goes to see, he finds a young naked boy wearing just a bell who disappears in the morning. Kyle soon realizes that it is his cow who i sunder curse of being a man in night and cow during day. It will be now only Kyle's true love that can save the farm Brookton Hollow from this curse. An interesting innovative story directed decently. (5/10)

This is one of the stories from the burning palms segment. Tom and Jerry are a well to do couple in West Hollywood. They are anticipating their daughter Mahogany whom they ordered from remote part of Africa. When she comes to their custody, they realize that she doesn't speak and prefers to stay in the bushes and fields rather than comforts of home. After repeated attempts, the couple gets frustrated, leave the girl in the jungle and instead buy a dog. This is supposed to be a black comedy and is a little funny in a weird sense of way. (4/10)

Unknown said…
Eu Não Quero Voltar Sozinho is now being made into a full-length film. I hope that it isn't ruined like Dare was.
April 20, 2014 at 11:23 AM