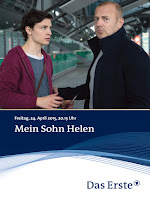 This film continues in the trans bandwagon, just as the title of the film suggests. The film had potential and could have addressed issues and talks but sadly it misses on that count. This doesn’t mean that the film is bad. The film is more of an emotional story between a father and his child, than really addressing the underlying issues.

Widowed Tobias is happy in his life with his 15 year old son Finn. Finn is trying to hook up his father with potential dates. When he gets to study in Sf for one year, he cannot leave this opportunity and he decides to go. Problem starts a year later, when Finn comes back home. 16-year old Finn is now Helen, a big secret that somehow Finn managed to keep secret from his father. Tobias is shocked at first but tries to understand. Thankfully there is no full-on drama. Next we see how people around Helen are getting used to the transition. As expected, problems arise at school at various levels and harassing also happens but Helen bravely faces everything on her own, with some support of a few friends in the class. Soon Helen wants to undergo a gender reassignment surgery. While Tobias is shocked at first, then he deals with the question of why he never realized how unhappy his son was. As a good father, he tries to understand the new situation and gets adjusted to the fact that he has got a daughter now.

Finn/Helen makes for a very convincing character/actor. The issue os about the plot which doesn’t give anyone much to do. It feels too convenient to send Finn off to SF and bring him back as Helen, a year later. What’s important is precisely what happens in that transition phase, which is the most difficult part. And why would Helen assume that its perfectly ok to just shock her father without any heads-up. I also felt the pain that Tobias feels when he realises that his dead wife and Finn had been planning this for a while but he for some reason was always kept out of the picture. He is heart-brown and starts questioning his own parenting style. A minor glitch happens which brings the daughter and father close again and Helen’s surgery is successful Miraculously, everyone who was opposed to the whole thing is shown in full support a year later. Common now, I understand that this is a movie but lets be practical. Life is not full of roses. There are difficulties and challenges and it would have been nice if some of those were shown as well. Having said that, the film never felt dragging or boring. It always stuck to the core issue.

Good intentions but story writer failed to address more dire issues that todays trans community needs and desires. This is ok as first step for now. (5.5/10)