Sígueme (Spain)
One day Rubén decides to grab his bike to enjoy the sea air, something he can’t do everyday. What Rubén doesn’t know is what will soon lead to an encounter behind the rocks with a man named Paco. When he returns home, his finance Julia notices that their engagement ring is missing and she realises that he has been unto something. This afternoon that will change a relationship between two people forever. The film ends with the trio together and  aid named Paco. A lot is left for the viewers to decide but this is a great short film although similar stories have been seen in full length feature films made on similar subject.

One Shot (Germany)
Kerem is Turkish. His family is conservative. His sister denied her religion. He is gay. A cliché you will say, and certainly it is one. Because this story is the beginning of a movie within a movie within a movie, where all characters came to shot a clip against racism. Despite all good intentions in the world, they end up in a quarrel of clichés. IT is an interesting concept but drags towards the end.

Crabs In The Sand (Israel)
Noam,13, is spending his afternoon with his little sister, Maayan, 10, and there two girlfriends, Elinor and Tami, waiting on the beach for the girls father to come back from a visit at the prostitute. The kids meet Michael, a 30-year-old retard, and play with him like any other day but This time Noam take it one step too far. A step that will change there friendship forever. Interesting but doesn’t really explain the motivation of why it was done, what was done.

Being Stavros (UK)
Stavros is looking for love. In a bid to find it he makes an unusual move - entering the ‘Mr Gay UK’ beauty pageant. Only problem is that at 420 pounds, Stavros weighs 3 times as much as his competitors. He still signs up and wins but the bureaucracy lets him down in the end. This is a documentary about one man’s unbreakable spirit.

Rick (USA)
Rick’s partner ends up dying in  car accident on the day the two were arguing on the streets and Rick still blames himself for it. Now, 3 years later, he depend son his friend Adam to pul him out of the darkness of his soul. The only problem is Adam is all made up non-existent entity. Interesting concept and well done.

Gay=Sin (USA)
This is not an anti-gay video. It’s an ironic statement showing the truth underneath the disgusting words people saying, showing that gay people are happy and beautiful and completely natural.

Indícios dois (Brazil) [Traces Two]
Close friends Peter and Guto are excited about moving to Rio de Janeiro. As they move to the new city, they are about to discover the city and their affections for things including each other. They evolve mixed feelings of the present, the memories, the reality and the dreams. Sharing one bed, the friends started feeling things of one another that they dare not accept. Is it just a dream or a reality that is coming true. Beautiful film.

Gagak & Merak (Brunei) [The Crow & The Peacock]
A bored mother at home gets furious when her only son shows up home with makeup and a dress on. When she confronts her son, she is caught unawares of the emotions that have been building up in her son, who only wants to be what his heart wants to be. What will the mother do? Will she take extreme steps to save her family honour or will she give in to the love of her son? First gay film from Brunei directed by Abdul Zainidi. Decent attempt and good performance by mother. I wish the son could have done better. Interesting concept. 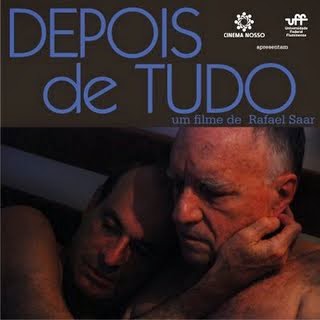 Depois de tudo (Brazil) [After everything]
A mature man is cooking dinner waiting for his love to arrive. They eat, watch a film of the tenth time, carries each other and sleep. Little gestures, daily tender routine, a movie that you still enjoy it as it was the first time, some wrinkles here and there & endless caresses. Looks like a usual daily routine in the life of a mature gay couple till morning comes and the lover has to leave to his “family”, not to know when can he come back. Some ugly realities of life forcing people to lead a life which probably they never wanted to in the first place but society forced them to. Very good.