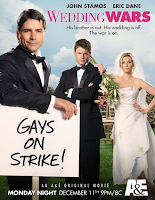 Wedding Wars is a very funny take on gay's struggle for marriage. I liked the fact that the issue has been given a humorous angle and not a serious issue based film. The film mostly explores relationship between 2 brothers who had some kind of falling out after one brother tells the other he is gay. I saw this film for the second time primarily to review it here and secondly cos it is funny too.
Ben and Shel are brothers. Ben who is an advisor to the governor has recently got engaged to governor's daughter Maggie. On Maggie's suggestion that they should try Shel as their wedding planner, Ben unwillingly goes to meet his brother and his partner Ted and asks him to be his wedding planner. Shel is shocked, surprised but readily takes it up, at the same time hoping that this will help bring the 2 brothers close to one another. Ben is clearly not very comfortable with the fact that Shel is gay but doesn't do anything about it. It is elections time and things are all fine until the governor gives his stand on gay marriage on national TV, a speech that was actually written by Ben himself in which governor says that a marriage should be only between a man and a woman. Shel is more disappointed by the fact that his own brother disapproves of gay marriage, a very fact that disappoints Maggie too. Shel goes on to protest against this in governor's house and also goes on strike against the wedding planning. His boyfriend Ted tries to explain him a lot but to no effect. Slowly his protest to everyone's surprise becomes a national event and gays go on strike everywhere in the country. This shows some funny situations since now the wedding goes in jeopardy since they can't find suitable people to help them. Anyway, all's well that ends well. When Shel understands how important the wedding is for his brother specially after Maggie decides to not get married because of all this, he pulls up his socks and gets all gays together to prepare for the most wonderful wedding that his brother Ben and Maggie could have. This helps in bridging the gap between the brothers and gives a channel for Shel to discuss gay issues with the governor.
Like I mentioned before, the film gives some insight into gay issues by being funny but at the same time talking about some very important issues which can have more desirable impact than some gay right advocates promoting something. Shel and Ben were very good in their roles. The start of the movie was a little awkward and it seemed to go nowhere but soon it picks up steam. The whole parent angle of Ben and Shel is also funny and so are the one line comments by the governor's wife. It goes overboard sometimes but most gay films do that. Its all good. Definitely a one time watch. Gay romantic movie with genuine gay social issues. (6.5/10)

I've stumbled upon your very nice blog by accident, looking for a beautiful Scandinavian film (it might be Danish, but I am not even sure about that) from the mid-nineties, about a gay couple living happily together that is subsequently broken up by one the guys falling in love with... a woman !
My partner and I saw it at Ghent's annual Internation Film Festival, and found it wonderful, but I cannot remember the title at all, nor any names of actors, so I have been surfing the net on and of for years now, without being able to find it.
One particular scene I remember is the man and the woman skating on an ice rink, which is where they find out that they have actually fallen in love with each other.

Does it ring any bells with you, would you be able to find it ?

Thanks so very much for your help, and congratulations again with your excellent work !

Golu said…
Thanks a lot for appreciating my blog. I think the movie you are talking about is called 'Shake It All About'
http://alternatesexuality.blogspot.com/2008/04/en-kort-en-lang-denmark-danish-shake-it.html
November 25, 2010 at 9:05 AM