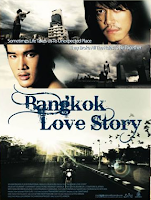 The name gives the impression of a usual gay love story but this one is different. Unlike most happy endings this one actually has a tragic ending and you feel for the men. Two completely different people meeting and falling for each other from different parts of society makes it an interesting watch.

Maek, an assassin by profession kills 'bad people' to satisfy his bosses but cannot kill 'good people'. He is the sole support of his mother and younger brother, both of whom suffer from AIDS. The source of their infection is the abusive live-in stepfather. Maek is assigned a 'hit' and in stalking the young lawyer he is supposed to assassinate he finds an attraction to the obviously good, married, handsome Iht. When the moment comes to complete his grim duty, Maek finds out that Iht is not actually a bad guy and refuses to kill him. When his boss tries to shoot Iht, he takes the shot on himself to save Iht. Iht is compassionate and rescues Maek from the streets, taking him to his shelter to nurse him back to health. The two men bond and eventually submit to their passion. Yet when Maek recovers, he cannot face the truth of his feelings and separates himself from Iht. Iht's wife is suspicious about Iht's distance, stalks him, and witnesses a secret moment of passion between Maek and Iht, and the discovery turns her into a potential assassin herself. Iht is now by himself, unable to regain Maek's commitment until a series of events leads to the ultimate arrest of Maek: from the imposed separation caused by Maek's incarceration, Iht remains faithful to his love. And waits almost 20 years for Maek to come out of prison and in the interim taking care of his younger brother. But destiny awaits something else. Maek comes out of jail and the two men think they can finally b together but Maek is shot and killed laving Iht alone as always.

The lead characters acted very good. The only part that bothered me was that it was dark. The cinematography could have ben better but it was a big let down in that deptt. It was at times way too slow for me but I guess the director wanted to press upon the the situation of the characters that they are in. Otherwise the film does manage to strike a chord with the audience.

Could have been handled with more emotions and less artistic. (5.5/10)

Anonymous said…
Just finished this one... Just when I thought it was safe to sit back and watch a little love story WRONG! LOL! You will see that I love Asians so I try to follow that by buying little gay themed asian films.... This is a great story I wished it would have been titled Bangkok Death Story cause even till the last part I thought that it was gonna end better. I am over here having to wipe my eyes as if I had just watched "Ol Yeller" LOL! Still I felt the storyline between the mother and brother was not needed. I am not sure why they were there nor did I see what role they played. You truly feel for someone who loves anyone as much as Rock and Cloud did you dont see how much Cloud cares till the end but once you do it all worth it.... Since we are on the topic of gay asian films another one you should check out is "Blossoming of Maximo Oliveros" Thanks always Michael!
June 23, 2010 at 10:58 AM